Sailing in and near Clew Bay 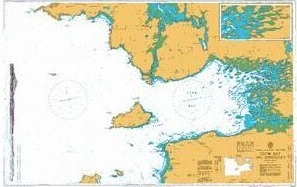 The Clew Bay area offers excellent cruising with a  number of beautiful, safe anchorages, well sheltered from the prevailing south-westerlies.

Roonagh quay, at the southern entrance of Clew Bay, is used by the ferries to  Clare Island and Inishturk and is not suitable for a yacht.  Clare Island harbour, 3 miles to the North West, is a much better place. It is well sheltered  from all winds with West in them and offers good facilities.  During the day, do not tie up alongside the outer jetty, which is used by the  ferries and the fish farm boats.  In the summer, it’s much better to pick up one of the yellow moorings (free) North East of the jetty and use the tender, which can be safely left unattended in the inner harbour,  to come ashore. If draft and tide allow, it is also possible to come alongside one of the old stone quays in the inner harbour and in reasonable weather, a yacht can safely dry out  there (or even on the beach) on a clean sandy bottom. In neap, a boat drawing less than 5 feet could stay afloat at the outer end of the inner jetty. Showers are available at the community centre, the big cream building just above the North end of the beach,  ask at the Anchor bar. Dinner is available at the Sailors bar,  the big blue building on the North shore of the harbour, a few minutes walk from the piers. Water is available at the outer jetty, but check with the ferries before coming alongside.

On the South side of Clew Bay, it is possible to dry out inside Old Head pier, good shelter and clean sandy bottom, but no facilities other than a petrol station with a small shop 20 minutes walk away, toward the village of Louisburgh. In an emergency, it is possible to anchor outside the moorings, North East of the pier, but it is not recommended as the ground is foul in places and swell tends to make the anchorage uncomfortable.  Further East, the small pier at Lecanvey has little to offer, other than the proximity of a  pub and a church.
The  inter part of Clew Bay is very well sheltered by the islands and offers many wonderful anchorages as well as many islands to explore. The harbour and town of Westport at the South East corner of the bay and  Newport at the North East are a long way in, but offer perfect shelter from all wind directions and good facilities. Westport also has good bus and train connections.
The easiest and safest way into the South part of the inner bay is through the marked channel South of Inishgort lighthouse. Note that the sea can be rough there with a Westerly wind against a dropping tide, and that there are many fishing buoys in the area.  The channel to Westport is well marked by a number of light buoys, and it would be possible to get from there to Westport in the dark, although for a first visit, daylight and a rising tide would be preferable as the channel is winding and at time very narrow. There’s a floating pontoon for yachts just south of the entrance to Westport harbour, and it is also possible to tie up alongside the old stone quay and dry out there in soft mud.
If you’re happy staying at anchor, there’s good shelter in Dorinish harbour, either in the bay to the East of Dorinish  and Dorinish Beg (which once belonged to John Lennon),  or with a Northerly wind, South of Inishlyre, and the holding is good. It is also possible to come alongside the pier on the East shore of Inishlyre or to anchor in Inishlyre harbour, East of the moored island boats, good shelter from all wind direction and good holding. There’s also an anchorage in the little bay East of Collanmore, just across from Rosmoney, home of the Mayo sailing club.

Those looking for a challenge may want to try one of the narrow channels South of  Dorinish or Inishleague. These channels however are narrow, bordered by unmarked sunken rocks, and the tidal streams set across them, so good pilotage skills are required.
The main channel to the harbour of Newport is well marked, and there are a number of well sheltered anchorages along the way. The main channel passes North of  Inishoo, but coming from the Cloughcormckk West cardinal buoy  it is also possible and just as easy to go to the south of the Inishoo. The channel is narrow but deep and both shores are steep to. There’s an excellent anchorage off the sandy beach East of Inishoo and it is possible to dry out on the beach on a clean sandy bottom.
Further North, Rockfleet Bay (Rosturk) is a very pretty anchorage, well sheltered from all winds. The bottom is soft mud, and the holding somewhat suspect. It is possible at high water to come alongside the old stone pier there. Navigation at the entrance is challenging, as there are no marks (other than that for Newport) and a few sunken rocks and mud banks. One should in particular be weary of the mud bank North East of Inishdasky which dries and is on the direct route.
On the North shore of the bay, the anchorage East of Moynish More and the one off Mulranny beach would be good  for a  lunch break, but may not be suitable for an overnight stay.

Achll Beg, North of the entrance of Clew Bay has a very pretty anchorage off the sandy beach on its East side. It is well sheltered from winds from South West to North East. If there’s a heavy swell coming in, or with southerly winds, it is possible to continue up Achill Sound. Once inside the red masonry beacon North East of Achil Beg, the shelter is perfect  in all weather, but the tidal streams are quite strong, up to 5 knots at Darby point. It is possible to anchor further up Achil Sound, the scenery is splendid and the sand and hard mud bottom offers excellent holding. Access is possible day and night in almost any weather and Achil Sound should therefore be considered one of the best harbour in Clew Bay.  However, when a very heavy Westerly swell is running, the sea can break on the shallows East of Achil Beg on the ebb, and in these conditions one should only attempt to enter the Sound toward the end of the flood.

In fine weather or with northerly winds, the southern coast of Achil island has a few pretty anchorages, with Keem bay, a real “post card” anchorage, and one of the most beautiful beaches in the world topping the list.

South of Roonagh point, Killary harbour and Little Killary are well sheltered and beautiful anchorages, but entering either requires good pilotage skills as there are few marks, but many rocks! There are also a lot of fishing boys in this area, so a careful watch is necessary.
Inishturk island,  to the South West of Clew Bay, is well worth a visit. It is one of the smallest and most isolated inhabited island off the Irish coast and is rarely visited. The harbour offers decent shelter from Westerlies, and the locals are friendly to yachts. It is possible to tie up alongside the outer jetty in front of the ferry, to the right of the entrance. This berth never dries out. In the summer, it may however be best to pick up one of the yellow mooring buoys in the outer harbour and use the dinghy to go ashore. The inner harbour dries out, hard sandy bottom.  Do not tie up to the old stone quay on the left of the entrance, the berth is foul.