For anyone who hasn’t been following the news lately, this year UN Climate Change Conference (COP26) is held in Glasgow.  My son Theo, who is  very active in the Climate movement and had already attended the COP 25 in Madrid, was attending the UN sponsored Youth4Climate conference in Milan as one of Ireland’s representative, and from there, wanted to travel to the COP 26. What better way to do so than by sailing boat? Not only is it the greenest travel option, but (I suspect) the cool factor was making it most attractive.  So I was coaxed into sailing from France to Scotland in October.

We left l’Aberwarch on the 16th, in almost perfect conditions between an anticyclone slowly drifting to the East and low pressures moving in from the Atlantic. We were thus assured to have fair (southerly) winds for the 240 miles crossing to Ireland. 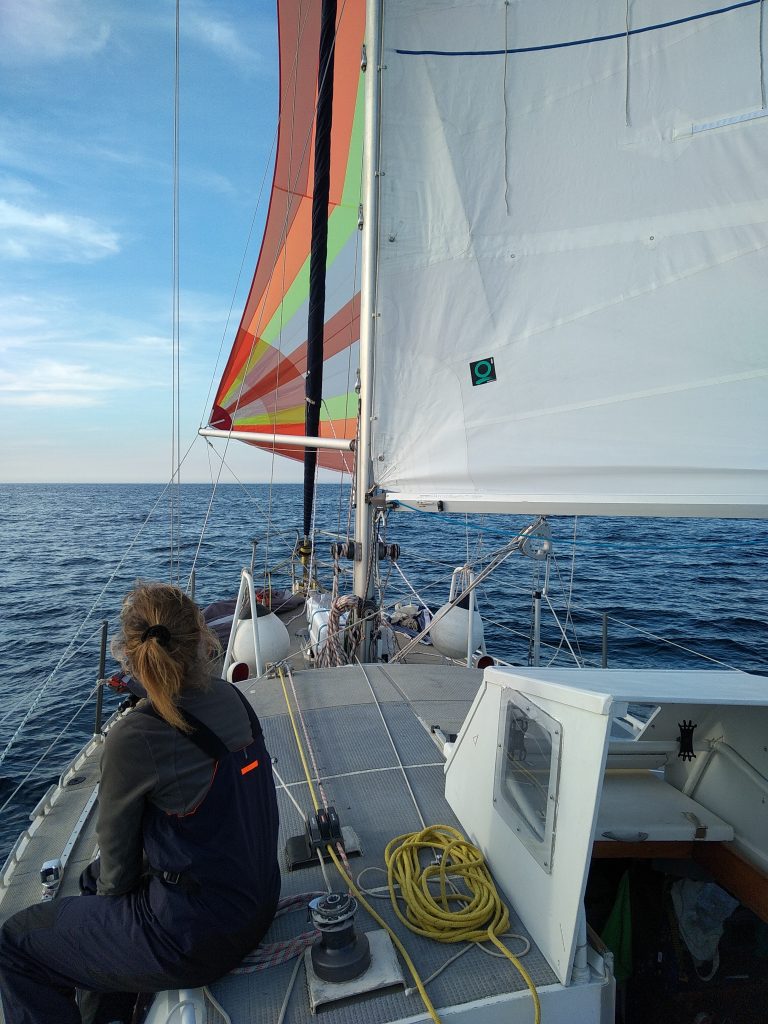 The spinnaker got up as soon as we were out of the Aberwarch (narrow) channel, and we kept it through the night in a gentle South-easterly. As we approached  the Scillies,  the wind dropped and a swell started building up ahead of the approaching Atlantic low. We motored for a couple of hours to the West of the Scilly isles, but were soon sailing again, this time under boomed out Genoa, in a building swell and freshening wind.
We were making for the river Suir estuary, as it is easy to enter in almost any weather and offers excellent shelter. This proved to be a good idea, as when we got there, the following day, after a fast but somewhat uncomfortable passage, the swell was up to 8 feet, and the visibility to less than a mile, and we sighted the first buoy of the marked channel to Waterford harbour before we saw Hook head!

The stopped in the small fishing harbour of Duncannon for a couple of nights, before motoring up to Waterford for a shower and a bit of shopping, as we were waiting for a bad North-westerly to ease before continuing on to Dublin. The sail up the River Suir, which I had done once, many years ago, on the late Asguard II, is particularly scenic. 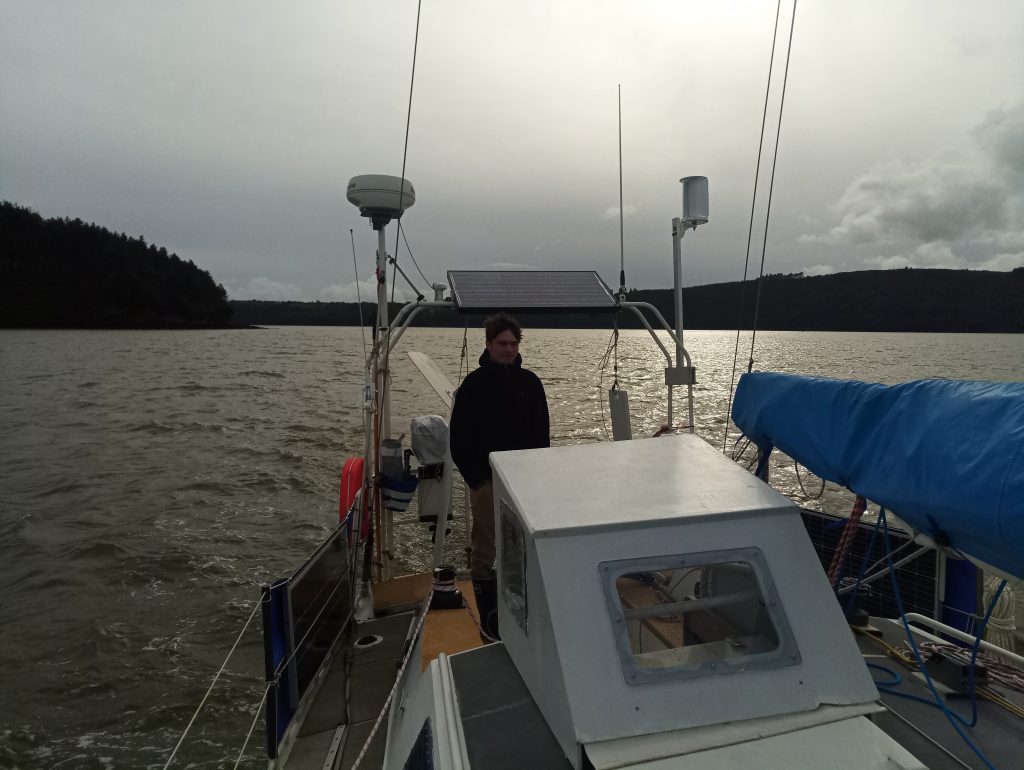 From Waterford, we had a most pleasant overnight sail  to Dublin in moderate westerly winds, arriving in Dun Laoghaire harbour early in the morning of the 22nd. As we were ahead of schedule, we left the boat there for a few days, going back to Clare Island by train, while waiting for another weather window to sail up to the Clyde. On the evening of the 27th, the conditions were right, and although we had to motor out of Dublin bay in very light winds, we enjoyed excellent conditions going up the Irish Sea and crossing the North channel, arriving in Kip marina, 20 miles East of Glasgow,  early in the morning on the 30th.

We had a berth booked in Bowling harbour, a few miles East of Glasgow, and planned to arrive there the following morning. We left early to take advantage of the end of the rising tide, but as we were passing Greenock (the entrance of the river Clyde), the Easterly wind gradually got up to gale force, and after half an hour trying to motor against it, we realise that with the tide soon turning against us, we simply weren’t going to make it up river that day, and turned back towards James Watts marina at Greenock. As soon as we turned her bow downwind, the boat flew down river at 6 knots under bare poles, and we were soon safely tucked in at James dock Marina. From there, Theo headed up to Glasgow by train, while I took advantage of the marina’s excellent Wifi connection to catch up with emails. The following day was spent in Greenock, with the wind, now Northwesterly, still blowing a gale.

It wasn’t until the morning of the 2nd that we were able to take advantage of light winds and a rising tide to make it to Bowling lock in glorious weather.

Bowling harbour, which is actually the western entrance of the Forth & Clyde Canal,    proved to be an excellent choice, close to Glasgow city centre, cheap, very friendly….

…and a rather pretty place too.