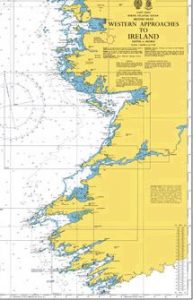 On the first leg of the journey, the direct route from Clew Bay  leaves the islands of Insihurk ,  Inishboffin and Inishark to port, (thought with a Westerly swell, I would  stay inside the islands for shelter). We will probably leave Clare Island at high water, as this gives us the best chance for a fair tide until we’re passed Slyne Head.

Pass Inishark, the course is almost due South to Sybil point, the North entrance to the Blasket Sound.  A decision will have to  be made early on  to either head for the Blasket Sound (the best option if we can get there in daylight with a fair tide) or to go outside the Blasket islands, a longer and more exposed route, but safer in darkness.  If wind and tides are foul when we get there, it’s possible to stop in Smertwick  harbour before the Blasket islands, but there’s otherwise more to loose than to gain by stopping anywhere before the Dingle peninsula.
After the Blaskets, Ventry harbour isn’t much of a detour, and would allow for a full night sleep if we got out of the Basket sound near nightfall.
The next leg, down to Dursey head, is heading roughly SSE,  with possible stops in Valentia, Ballinskellig Bay (if there’s some North in the wind) or Derrynane, a beautiful anchorage at the entrance of the Kenmare river.
After Dursey head, the direct route to Ushant is 280 miles (about two days at sea) and leaves Mizen Head and the Fasnet rock (as well as the Scillies ) well to port. We  may decide to stop in Crookhaven, harbour, just East of Mizen head, for a full night sleep before the leap over to the continent. 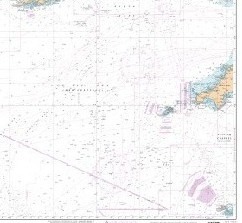 One important decision on the crossing to France is whether to go North or South of the Traffic Separation Scheme located to the North West  of Ushant  (see charts). This area is very busy with shipping traffic coming in and out of the English channel. 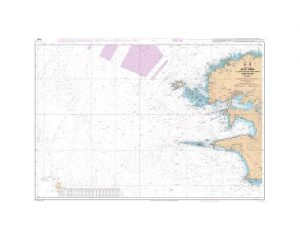 The most prudent route (and the direct one heading for South Brittany)  leaves Ushant and its  TSS to port and goes through the fearsome Raz de Sein, where the tide can run up to 7knots. But if stopping in Brest, the northern route, going through the well lit Chenal de la Helle,  is shorter, and would be quicker with a fair tide.
If we decide not to stop in Brest, then the decision will have to be made whether to go through  the Raz de Sein, or to leave the chaussée de Sein to port and head straight for Penmarch. The offshore route is a much better option if the tide is going to be foul in the Raz de Sein, although in this case, one could stop in Morgat and wait for a fair tide.

After Penmarch, there are a number of good harbours on the Britanny coast, but I’ll probably want to stop in  the beautiful Archipel des Glenans where I have many happy  sailing memories, before heading to Lorient,
Apsara will be in Lorient,  where I will be visiting friends, for a week or so before heading back home the way we came.

Sailing to the midnight sun

The plan for this summer trip is to leave Ireland in June and go around Iceland anticlockwise, with a possible detour by the East coast of Greenland (ice permitting) before coming back home late July.
Something like that. 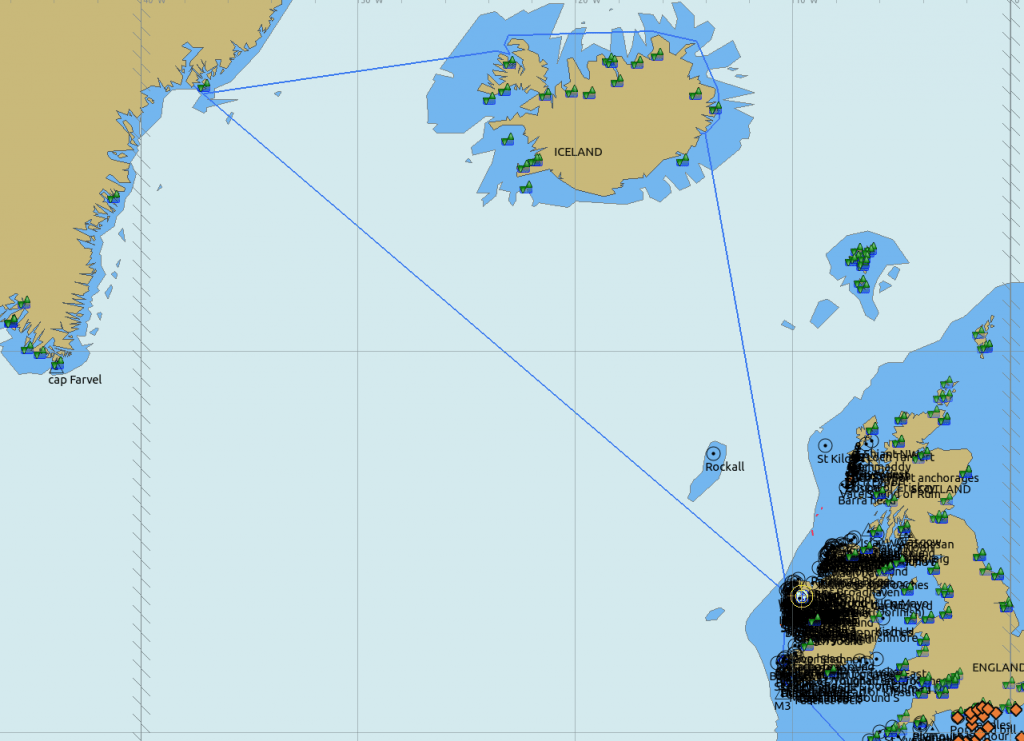 Total distance around 2500 nm, or just over 2000 miles if skipping Greenland. Can be done in a month.